As we await the headline figures for the 2016 Isle of Man Census (expected in the new year), there appears to be some uncertainty about what we can expect. Whilst numerous websites continue to offer wildly inaccurate over-estimates of the Island’s population, the Chamber of Commerce has predicted a more substantial decline than previously expected.

As the new Tynwald moves towards agreeing a programme for government for the next five years, this article will outline the latest news on the Island’s current population and briefly examine its implications for a successful political response to the population issues.

Depending on which sites you access, you can find confident statements that the population of the Isle of Man has already reached 88,195 (CIA World Fact Book), 88,706 (the ‘live’ figure provided by Worldmeters.info) or 89,015 (Countrymeters) 1.

These over-estimates are easy to understood as they as they represent the ‘business as usual’ scenario as it appeared from the 2011 Census. Between 2006 and 2011 births exceeded deaths and immigration exceeded emigration. The population of the Isle of Man had grown by over 800 people every year. When the 2011 Census pronounced a record resident population of just under 84,500 it marked an increase of more than 4,000 since the Census of 2006. If this level of population growth had been sustained between 2011 and 2016 it would have produced a population of about 89,000 by 2016. The 2016 Census result will show that this did not happen.

Earlier this week, the President of the Chamber of Commerce prompted local news media to look in the opposite direction when she suggested that the 2016 Census will show a larger fall in the population than anticipated. On Manx Radio’s Mandate programme Micky Swindale confidently insisted that: ‘If the census results don’t show that our population has fallen, possibly fallen more substantially than we might have expected, I’ll eat my hat’ 2.

The Chamber’s confidence is evidence-based and no hat appears to be under any direct threat. Six months after the government began to monitor population based on the number of people registered with a general practitioner there has been the first modification of the monitoring process. The third quarter economic report (July – Sept 2016) for the Council of Ministers (CoMin) 3, published in November, presents revised figures (this process is not as straightforward as it sounds - see blog ‘Refined monitoring predicts decline’). These suggest that the decline in the population has been greater than previous estimates indicated. It now seems likely that the population at the time of the 2016 Census was around 84,000, approximately 1,000 lower than previous figures suggested (despite natural growth perhaps approaching 200 over the five years). 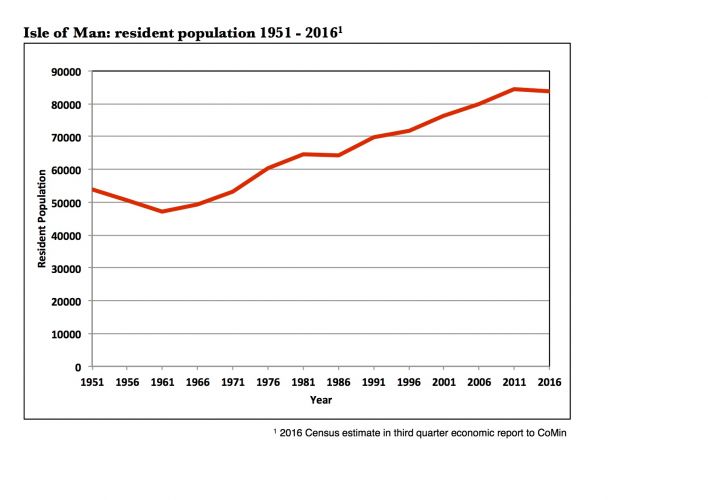 The revised estimates also offer something else new. When GP practices provide data on patient numbers they are required to indicate how many of their patients are aged 65 or over. The recent CoMin report uses this data to estimate that whilst the population has fallen by 0.7%, the proportion of the population aged under 65 years has fallen by almost 4.0% and the over 65 years group has risen by 14.4%.

How significant are these revised ‘estimates’ (for that is essentially what the population monitoring process provides)? The following bullet points offer an overview.

• The revised estimates suggest that the 2016 Census will show the Island’s population to be approximately 84,000. This would amount to a decline of five hundred since the 2011 Census.

• A population decline of 500 (0.7% of the population) would help to explain some of the lack of growth in tax yields and in sectors such as construction, retail and services as well as some recruitment problems.

• The estimates suggest that there has been population decline despite an increase in the GDP of £1 billion (28.5%) between 2011 and 2015. This would strongly challenge the notion that all economic growth in the Isle of Man automatically generates population growth.

• Additionally the estimates point to population decline despite very low unemployment (1.3%) and shortages of workers in sectors from IT to nursing and from engineering to hospitality.

• The age-related estimates add weight to the belief that the population slowdown and decline is due to the net emigration of adults in the younger age groups. This would be entirely consistent with the 23.3% fall in the number of births between 2010 and 2015.

• One key implication of the new estimates is that population ageing is likely to be taking place more quickly than past projections have suggested.

If these estimates are confirmed in the Census results (due in March), there would appear to be three significant political implications.

The first is that the population decline in the Isle of Man is not simply an economic problem. The UK, with a slower-growing economy, saw population increase by over 510,000 (0.6%) in the year to mid-2015 (with over 330,000 added through migration and more than 170,000 added by natural growth). Unemployment in the Isle of Man is down to 1.3% compared with 4.9% in the UK. There cannot be a simple belief that the Enterprise Development Scheme on its own will grow the economy and boost the population.

The second is that the basic assumption of Island’s Strategic Plan, the document that informs planning policy across the Island, that there is a forecast need for 5,100 additional new houses to be built between 2011 and 2026 looks flawed. The population elements of the Strategic Plan need to be updated after every Census.

The third is that population decline of 500 in the Isle of Man does not just involve the decisions of a couple of hundred households. The Census is likely to show that perhaps a few thousand people moved to the Island in the last 5 years but but that the number of people who moved away was 500 higher. Between 2006 and 2011 over 8,000 people moved in and over 4,500 moved away. The estimated decline of 500 is the simply net balance of the immigration and emigration flows. Work permits suffer from slow processing and leave family members feeling insecure in their employment prospects. They need to be reformed but these cannot be the biggest barrier to population growth. For younger adults the main push and pull factors are likely to be property rental prices, lack of access to mortgages, low support for childcare and nursery education, student university fees issues, high utility costs, high transport costs and limited entertainment facilities.

There is a need for further research to inform thorough debate, policy development and actions on population issues. Migrations decisions are based on the full range of social as well as economic conditions. They are also influenced as much by perceptions as by reality. It is not adequate to think that removing the barriers to business growth will reverse the population decline. Population policy must be included in the framework for the programme for government.