When the Isle of Man Population Atlas was published in mid-April 2016 it urged that the quarterly economic reports to CoMin should include an estimate of the population.

'In the Isle of Man the quarterly economic reports to the Council of Ministers are some of the most informative documents in the public domain. The headings within the reports are largely fixed and routinely cover the general economy, manufacturing, financial services, ebusiness, shipping, aircraft register, construction, energy, the visiting economy, agriculture, fisheries and retailing, but they do not routinely include ‘population’. Some of the population indicators for the Isle of Man... indicators such as the number of people registered with a general practitioner or school year group numbers, are available on a quarterly or termly basis and could be used to produce quarterly population estimates that could be central to the economic reports. It is impossible to overstate how important the population is to the economy of the Isle of Man.' (page 140)

Six weeks later, at the end of May 2016, the first population estimates, based on the number of people registered with a general practitioner, appeared in the report for the first quarter.

Although based on only one data source, the figures produced were the result of a bold decision not just to use the data but to develop a process to remove ‘ghosts’ from the data. The raw figures for people registered with a doctor always appear to be higher than the actual population, probably reflecting a time lag before young adults leaving the Island to live in the UK find settled accommodation and register with a local GP. Estimating the scale of this 'ghosting' and removing the non-residents is clearly a complicated process.

The impact of this refinement has been to lower the population estimates over the period 2011-2016. The graph below shows the initial estimates in blue and the revised estimates in red. It now seems likely that the population at the time of the 2016 Census was around 84,000, approximately 1,000 lower than previous figures suggested (despite natural growth perhaps approaching 200 over the five years). 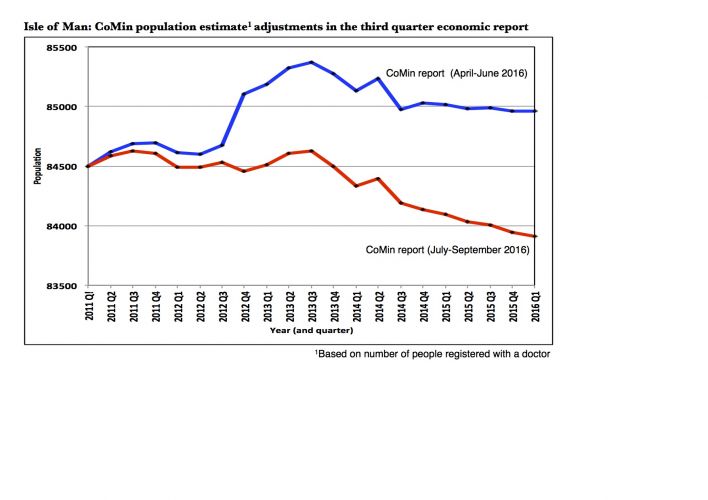 The report on the 2016 census will provide a new monitoring benchmark. It is important that the monitoring process continues to be developed using not only the number of people registered with a GP but also additional data such as the number of pupils on school registers in each yeargroup. We cannot afford to wait until the 2021 Census before we know if the population decline of the last five years has been reversed.