The report on the Isle of Man Census 2016 is due to be published next month. What can we expect it to show?

The 2016 Census Report will be published next month (March) and will be one of the most important for decades. It will show a decline in the resident population, accelerated population ageing and the impact of both the net emigration of young adults and the fall in the number of births.

The questions it will answer include: 'How much have emigration flows changed over the last five years?', 'How far have immigration flows reduced?' and 'How quickly are we losing the Island's young adults'.

It will also inevitably raise questions about the causes of these population issues and about population policy.

As the publication of the 2016 Census report draws near, it is a good time to look at what the Census is expected to show making use of information provided in the Quarterly Economic Reports to the Council of Ministers' from 2016 and data provided by the Economic Affairs Unit. 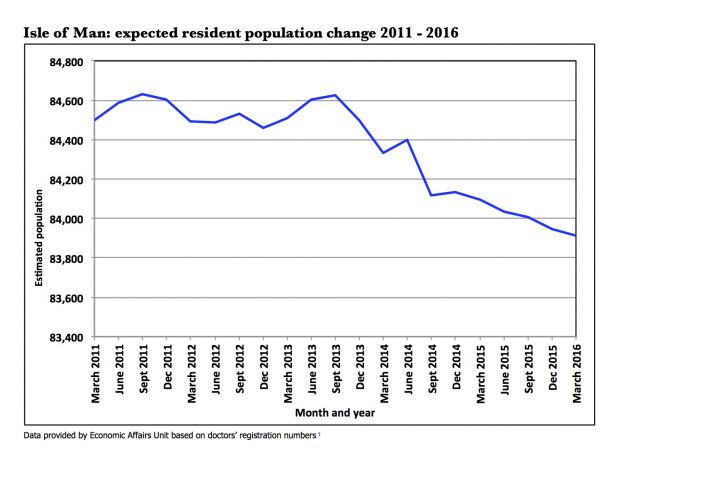 Data provided by the Economic Affairs Unit suggests that the Census will show a marked change in the age structure of the Island's population. The number of people aged under 65 years is expected to have fallen by more than 2,700 (almost 4%) to less than 67,000. Most of this decline is likely to be in the population aged under 40 years. The number of people aged over 65 years is expected to have risen by almost 2,200 (over 14%) to more than 17,000. 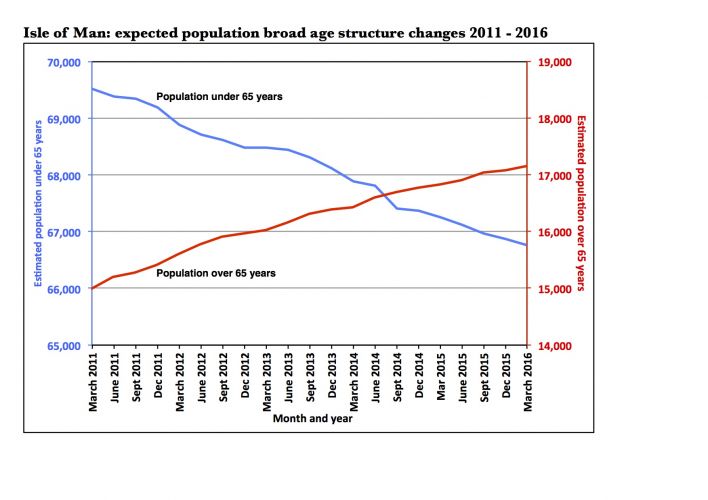 An estimated age-sex profile for 2016 can be produced based on the 2011 Census but taking account of:

This profile, compared with the 2011 Census, is shown below. This is the pattern that is expected to be confirmed when the 2016 Census Report is published in March 2017. Every age group over 65 years is likely to be larger in 2016 that at the previous census and most of the age groups under 65 years will be smaller. The proportion of the population aged over 65 years is expected to have risen from about 17.7% in 2011 to over 20% in 2016. The median age is likely to have increased from 41.5 to over 44 years

One of the key questions to be answered by the 2016 Census Report relates to migration. The expected actual change is a decline in the total population of between 500 and 600 people. Birth and death figures are already known and natural change between the 2011 and 2016 censuses showed a growth of 175 over five years. If the estimated population of under 84,000 is correct we can be certain that emigration between 2011 and 2016 has exceeded immigration giving a net migration loss of about 750 people. Although we have an idea of the balance of migration we have no indication yet of how large the overall migration flows have been. 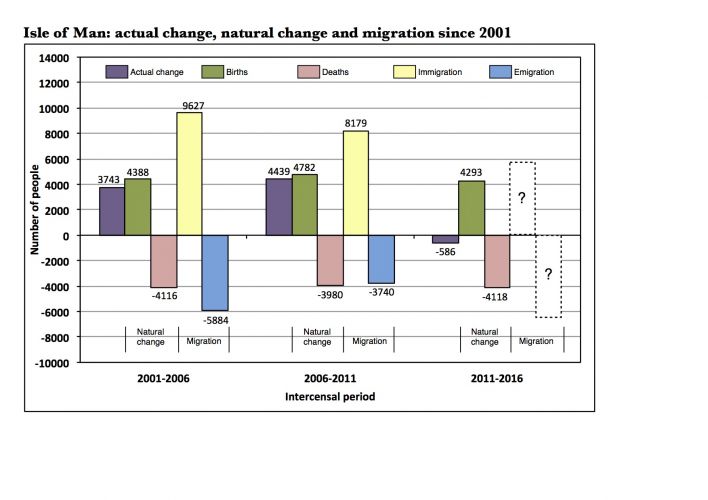 There can be no doubt that the Isle of Man's population is vulnerable in a number of respects. The combined effects of an ageing population, a declining population, a declining birth rate and the net emigration of young adults require a coherent overall population policy. When the Census results are published there will be a need for further research to inform thorough debate, policy development and actions on population issues. Migrations decisions are based on the full range of social as well as economic conditions. They are also influenced as much by perceptions as by reality. Simply removing the barriers to business growth will not reverse the population decline. Population policy must be included in the programme for government.