The text below was sent to IOM Newspapers and used as the basis for an article that was published in an edited format (minus the graph) in the IOM Independent on 3 January 2020 under the heading: "Don't lock planning policy in to 89,000 target".

The report on the Inquiry into the Draft Area Plan for the East has been published - and it contains a great deal of common sense.

I welcome the Inspector’s concern that the Plan appears to recognise recent projections reducing the estimated need for housing by almost half, but still advocates the need for over 2,400 new dwellings. I agree with his conclusion that the Plan: “…would be likely to results in a serious over-provision of housing” (para 213).

I also support his position that. “…priority should be given to the development of land allocated for residential development within existing settlement boundaries" (para 249).

However, I am much less convinced about the recommendation that some development sites should be placed in strategic reserve and released for development when the population reaches 89.000 (para 223) (“Wait until the population hits 89,000" - Examiner 10 December 2019).

The graph shown here makes use of data from the most recent Cabinet Office Economic and Statistical Update (Quarter 3 2019) published last week. Following the 2016 Census, there has been some evidence of population growth, but it has taken more than 3 years for the population to rise by one thousand. The trend on the graph suggests that the figure of 89,000 may not be reached until after 2030. By then, with climate change mitigation in full flow to secure a net zero-carbon position by 2050 (or earlier), our planning priorities may look very different. We should not be making planning decisions now that may lock us into fixed outcomes more than ten years in the future.

The continuing uncertainties of Brexit make it very difficult to predict future population change in the Isle of Man. The lowest unemployment in the UK since 1975, the promises of the new leadership in Westminster and the news of tighter household budgets in the Isle of Man captured by the recently published Income and Expenditure Survey further add to the uncertainty. Structural changes in Island’s economy may also impact on population over the coming years.

There is no certainty that a population of 89,000 will ever be achieved under existing pressures (pushes and pulls) and policies. Look again at the graph. In the three and a half years since the census, the estimated number of people aged under 65 years has risen by just 106. It is flatlining. Over the same period the population aged over 65 years (not shown) has risen by well over 900. Is this the balance of growth that we want? We need much greater clarity, and flexibility, surrounding population policies, expectations, planning and monitoring.

The Island's planning does need to be guided by census counts, and estimates, but we need to keep future options open so that we can identify the most appropriate responses in real time. 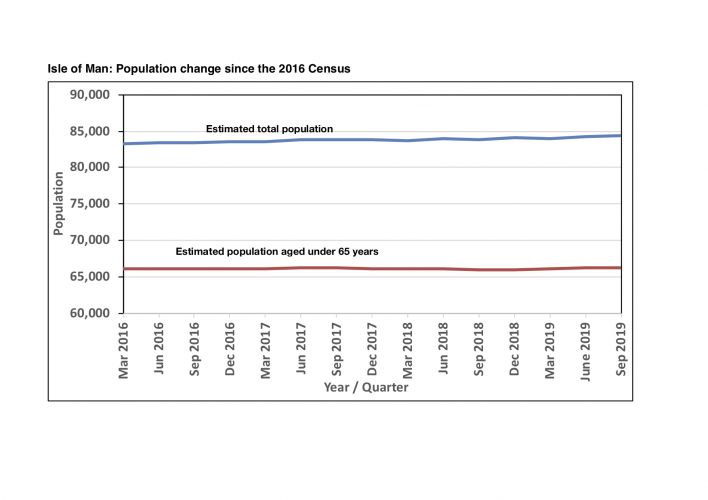