The 2019 figures for births and deaths in the Isle of Man showed a decline in the number of births for the ninth consecutive year.

In 2010, the total number of babies born on the Island peaked at 1,023. Last year the number of births registered was just 710. Births have fallen by 30.6% in 9 years. This marked fall in births will have many effects, some of which will be long-lasting. 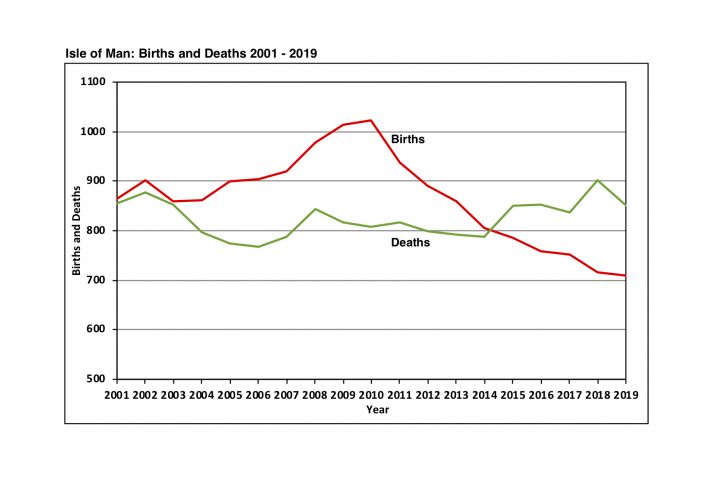 One inevitable, and relatively short-term effect, will be a reduction in the size of the primary school population. The oldest of the 1,015 pupils born in 2009 (see graph) are now turning the age of 11 and those still resident on the Island will soon be moving on from primary school. The pupils replacing them will be those born early in 2015 who are now reaching age 5 – a much smaller group of just 785. Total primary school numbers could fall by around 200 per year over each of the next five years.

The longer-term effect will be a gap in the current 0-4 years age group as it passes up the population pyramid graph. This gap will still be visible in 70 years’ time in much the same way that the post war baby boom is visible today.

The fall in the number of births in recent years is not just restricted to the isle of Man. Births peaked in Scotland and Northern Ireland in 2008, in Wales in 2010 and in England in 2012. All four of the countries showed declines in the number of births up to 2018 (2019 data is not yet available). But none of these countries had a decline anywhere near the Isle of Man’s figure of over 30%. Scotland and Wales had declines of approximately 15% and 13% respectively, whilst England and Northern Ireland both had declines of around 10%.

These changes are, in turn, part of a global picture of decline in the number of children women are having. Over half of the countries in the world now have fertility rates (1) below the replacement level (2).

(2) The replacement level is approximately 2.1 births per woman.

The number of deaths recorded in the Isle of Man in 2019 was 850 giving a natural population decline (excess of deaths over births) of 140. This is the fifth consecutive year that the Island has experienced more deaths than births.

Our population would be shrinking except that, according to government estimates, this is compensated by modest migration flows. The Isle of Man is not the only country to be faced with an ageing population and natural population decline – but its ageing is happening at a faster rate than in most other countries.