Population estimates for March 2020 - and the need for improved estimates

The latest economic report for the Isle of Man Council of Ministers, covering the first quarter of 2020, was published at the end of May. It does not yet show the usual population estimate (the explanation offered is simply that “This data was unavailable for Q1 2020”) - but I have now been provided with the estimated population figures following a request to the Economic Affairs Division of the Cabinet Office.

The first graph below, shows changes in the total population for the Isle of Man. The figures for March 2011 and March 2016 are the actual Census results in those years. All of the remaining points on the graph are government estimates based on the number of people registered with a GP. It is important to recognise that these estimates are not future predictions but estimates of what size the population has currently reached at the end of each three-month period.

If reliable, this is broadly welcome news, though the 2019 Social Attitudes Survey, published in December, showed mixed views: 48% of those who responded said they would prefer the Island’s population to remain at the 2019 level, whilst 39% felt it should increase and 13% wanted to see it decline.

The different demographic experiences of the Isle of Man and Jersey are perhaps worth noting at this point. Whilst in the Isle of Man the resident population has not yet returned to its 2011 figure, in Jersey the resident population has increased by more than 8,700 since 2011 (from 98,100 in 2011 to 106,800 by the end of 2018). The Jersey 2019 estimates are expected later this month. 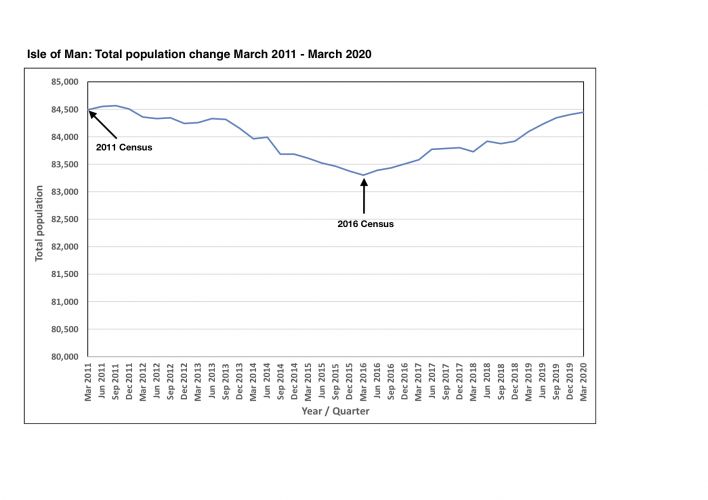 The second graph shows that, whilst the Isle of Man's total population may be almost back to its 2011 level, the population structure is showing considerable change.

The percentage of the population aged over 65 has risen to a record 21.62%. The population of the Island, already one of the oldest in the world, continues to age. 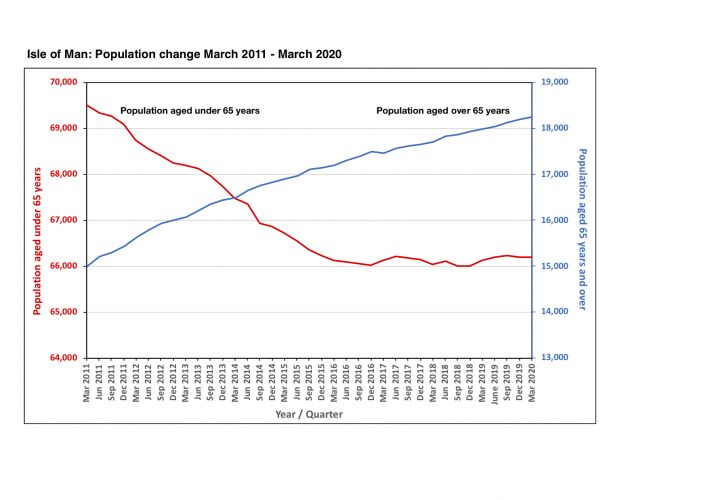 The population of the Isle of Man has become vulnerable over the past decade. It is vulnerable to the continued net emigration of young adults, to greater ageing of the population and to prolonged natural population decline (with a growing gap between deaths and births). In turn these issues will undoubtedly impact on the economy, on taxation and government expenditure, on the size of the working population, on the costs of healthcare and pensions, on the value of residential properties and on the ability of the Isle of Man to attract inward investment. These vulnerabilities are likely to be heightened by the medium and long-term impacts of Covid-19. It is imperative that population change is monitored in valid and reliable ways that provide much more detail than just total numbers.

The 2021 Isle of Man Census is now less than one year away and will provide both a very real test of the population estimates and an opportunity for establishing improved estimates for the future.

Up until 2016, there had been no attempt by the Island’s government to estimate the population in the years between censuses, only projections based on prior assumptions. At the end of May 2016, less than two months after the Isle of Man Population Atlas had advocated putting quarterly population estimates in CoMin economic reports, the Q1 report was published for the first time with a graph showing "Estimated population movement on same quarter year before" - based on "GP capitalisation numbers (adjusted for 'ghosts' using census data)". The format of the graph is difficult to follow but has been updated in every quarterly CoMin economic report over the last 4 years. It shows estimated changes from the same quarter one year earlier rather than estimated population totals. The estimate relies on a single source but it has been an important first step in monitoring the Island's population.

The 2011 Census recorded a population of 84,497 at a time when there were 86,925 people registered with the Island's GPs. This gap has been referred to as the 'ghost level' and is likely to be the result of a number of different time lags. There could be a short delay in notifications of births and deaths to a GP practice but the lags are actually much more likely to be caused by people moving from and to the Island. For example, some young adults who have moved away from the Isle of Man to take up work (perhaps following university) remain registered with their doctor on the Island until they have found settled accommodation and employment.

In 2011, there were 2,428 people registered with a GP on 31 March who were not counted as residents in the census on 27/28 March. The census total was approximately 2.9% lower than the GP register. In 2016, when the first estimates were published, this figure was subtracted from GP data submissions as a constant to estimate the population each quarter.

When the 2016 census results were published a year later, the resident population was approximately 4.2% lower than the GP register. With this ‘hindsight’, the population estimates dating back to 2011 were recalculated, and the graph of estimates up to 2016 was redrawn using subtractions on a sliding scale from 2.9% in March 2011 to 4.2% in March 2016 – ending with the 2016 Census population figure (see the graph below). Since March 2016, estimates have remained based on the fixed subtraction of 4.2% from the GP register totals. This is represented by the blue line on the graph.

These retrospective estimates are perhaps of limited value – it is the estimates of current population, and the trends they show, that are more important. 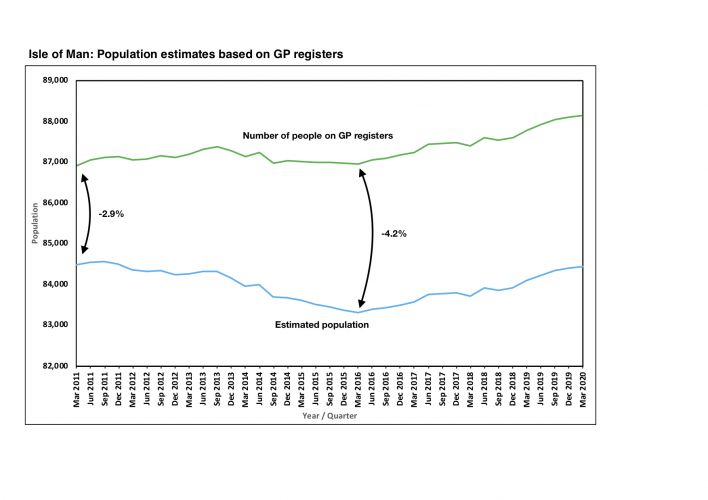 We have no information on how the relationship between the numbers on the GP registers and the actual population is changing as we move towards 2021 but we might expect that the estimates will become less robust the further from the last census year. In the years preceding 2016, the population had been in decline with net migration losses in the 20-30 age group. The population is now estimated to be growing and the numbers over the age of 65 years appear to be higher.

In 2021, the census will provide a new total population figure and confirm a new relationship between the population and the number of people on the GP lists. If the exercise from 2016 is repeated, the 4.2% subtraction will be replaced, the estimates between 2016 and 2021 will be recalculated using a sliding scale back to 2016 and the graphs will be redrawn using this new ‘hindsight’. All we can say about the current estimates is that they will be subject to revision and that they can only be described as provisional.

The Isle of Man needs a more comprehensive approach to monitoring population change based on more than just one variable (the numbers on GP registers). We need to base population estimates on a consideration of the data available from all relevant sources. Jersey currently uses births and deaths, labour market data, records on pre-school and school-aged children and population projections. The next census in 2021 will provide new baseline data for the Isle of Man and will offer an opportunity for improved population estimates going forward.

It is very important that the best available data is used to estimate what is happening to the population between censuses so that we do not have planning strategies and government policies based on out of date information. Evidence-based policies can only ever be as good as the information on which they are based.