The news that next year’s Isle of Man census could be delayed by a year because of the Covid-19 pandemic (Isle of Man Examiner 7 July 2020) is a cause for concern. It seems that this proposal has been made because of a shortage of resources in the Economic Affairs Division of the Cabinet Office and an expected squeeze on departments’ budgets.

The Eastern Area Plan is a prime example of what happens when decisions are based on out-of-date and erroneous data. The 2011 projections of population growth had already proved to be grossly inaccurate before being built into the original plan. The plan was based on the assumption that the population would rise to over 93,000 by 2026, whilst the actual population was already in decline before the plan was approved.

The Isle of Man currently faces some critical population issues and the census is the primary data source against which so many government and business decisions are made.

The government population estimates that appear in the regular Economic Reports to the Council of Ministers are based on the 2016 Census and are becoming increasingly less reliable as each quarter passes. The number of people registered with the Island’s GPs currently stands at a record high – but the government estimates involve the use of a constant taken from the 2016 Census total and suggest that the population is still lower than the 2011 total. This constant no longer applies and it requires a census to update it.

Since 2016 the population has returned to slow growth, although the under 65 population appears to have flat-lined. The ageing of the population has continued unabated and the number of births has continued to decline. These are not just academic issues: evidence-based decision making across a range of areas from health care and pensions to work permits has to be informed by census evidence.

One clear example of the importance of the census for policy purposes relates to primary school provision. The decline in births from a peak of 1,020 in 2010, to 710 in 2019 appears to indicate that primary school numbers will drop by over 200 in each of the next 2 years and continue falling for some years to follow. Only inward migration could stop this - and only the census can show if this is happening.

A second example relates to economic activity. The government has a strategy to increase the economically active population but it is unable to count this figure until there is a census providing the number of people seeking work but not registered for Job Seeker’s Allowance. We won’t know if the strategy is working until we have a census.

The census provides data that cannot be obtained through any other source on topics such as the number of households, household size, employment sectors, population distribution, population age groups etc. In the quarterly COMIN reports the scale of the adjustment made to the employment data when the 2016 census data was published shows how the census is essential to validate and revise a range of estimates.

If the census report doesn’t appear until 2023, it will immediately raise the question of whether an interim report is needed in 2026, risking further slippage and loss of vital data.

The first Isle of Man Census took place in 1821 and a census has taken place every ten years since then with just once exception during World War 2 (there was a mid-year estimate in 1939 and no Census in 1941). Additional ‘interim’ censuses were added from 1966 in recognition of just how important population changes are to the Isle of Man.

The 2021 Census will mark the 200th anniversary of census-taking in the Isle of Man; representing a remarkable, longitudinal socio-economic resource for future research as well as the basis for decision making.

Saving money by delaying data gathering would be a false economy. 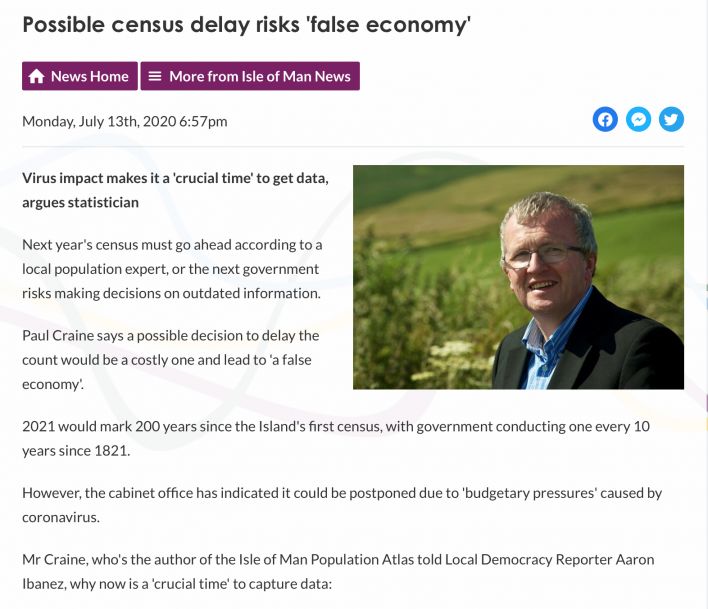 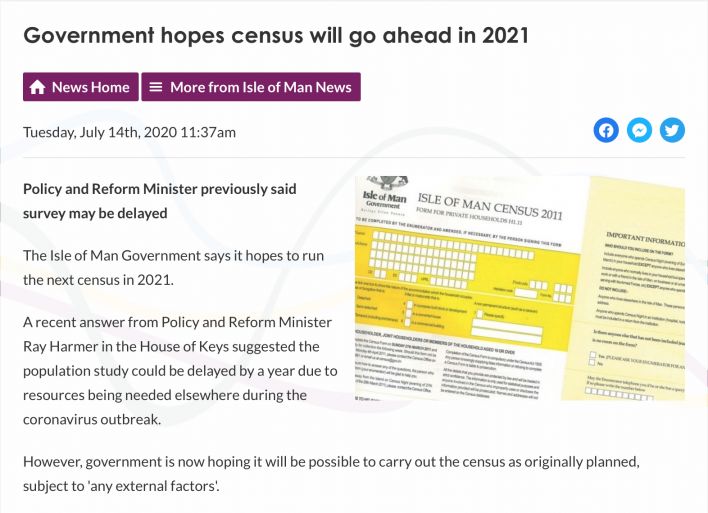