A written answer in the Tynwald Hansard on 15 September 2020 indicated that the production of the quarterly Comin reports was being suspended for a period of time, initially 12 months. The reason given was that the Economic Recovery Group (1) would be receiving a monthly ‘dashboard’ about the performance of the economy and there would be ‘duplication of work’. The intention, according to this source, is that the dashboard will be published, ‘thereby removing the need for the quarterly report’.

Given that the Comin reports have been the only source of population figures and estimates between censuses, this appeared to give cause for concern. However, a written request to the Economic Affairs Division quickly secured the population estimates for the second quarter (June) 2020.

It seemed possible that the peak period of Covid cases and deaths as well as lock-downs and border restrictions between the Isle of Man and in the UK might have impacted on the Island’s population. In reality the latest population estimates show little change.

The number of people registered with the Island’s GPs fell slightly from 88,151 to 88,086 between March and June 2020. This figure is the basis for the population estimate which now stands at 84,393, a decline of 60 over these three months.

The first graph shows the population at the 2011 Census and the decline over the next five years. The line is not ‘real’ in the sense that it is based on a sliding scale of adjustments to relate GP registers with census data. The number of people registered with a doctor continued to rise after the 2011 Census with a peak in September 2013 and it is likely that the actual population total followed this pattern.

In 2016 the census recorded a population decline of 1,183 since 2011. The new government estimates obtained this week suggest that, although the population has started to rise, it has still not recovered to the 2011 level after almost 10 years.

The new estimates provide evidence to support the suggestion that the so-called ‘mini-boom’ in the local housing market has been driven by Island residents looking for a property change rather than by inward migration.

Contrary to the over-optimistic government projections based on the 2011 Census, and subsequently on the 2016 Census, the population has not risen and the Strategic Plan and subsequent Area Plans now appear to be based on wishful conjecture rather than real evidence. The voices that have continually argued this have been vindicated.

It is essential that we have better on-going monitoring of the population so that planning can be informed by up to date information. It is equally essential that the Area Plans do not lock-in long-term planning commitments and are able to be adjusted in response to changed circumstances.

The 2021 Census, now just over 6 months away, will be a key source of firm population data that needs to be built into planning policy at the earliest opportunity. 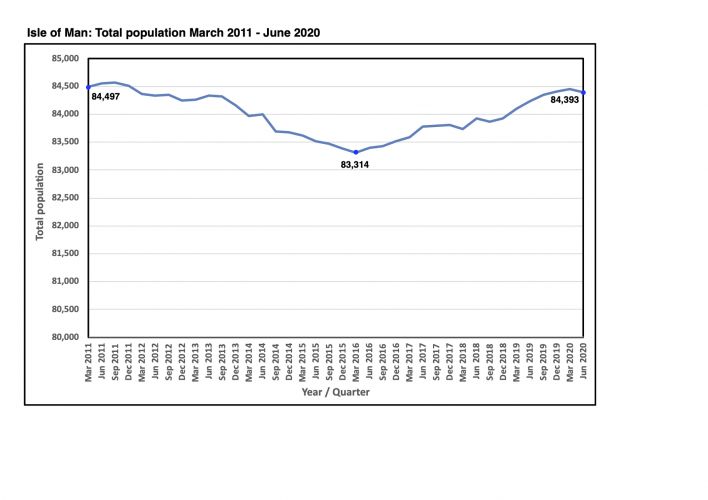 The second graph looks at the latest figures for the over and under 65 populations. The Isle of Man's estimated population may have fallen by 60 people between March and June but the number of people aged 65 years and over (shown by the blue line) is estimated to have grown by a further 36, giving a total over-65 estimated population of 18,293 (21.7%). In 2011, the 65 and over group contained fewer than 15,000 people (17.7%).

Whilst the older population has grown, the estimated size of the population aged under 65 years has fallen by almost 100 (shown by the red line). This may not indicate the start of a new trend but confirms that the under 65 population has been ‘flat-lining’ since 2016. 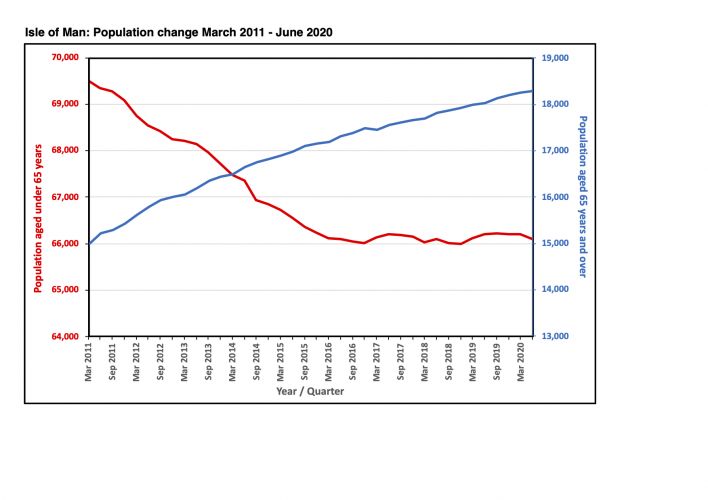 The Island’s population continues to age. Only Japan (28%) and Italy (23%) clearly have a larger percentage of their populations aged over 65 years whilst the Isle of Man ranks with Portugal, Finland, Greece and Germany (all at 22%).

It is perhaps surprising that the Island’s population does not yet show any clear impact of the Covid travel restrictions that have been in place since late March. However, it is clear that the population remains vulnerable to continued ageing, possible further overall decline and the net emigration of young adults.

(1) The ‘Economic Recovery Group’ (ERG) is chaired by the treasury minister, and is overseeing projects to create jobs to meet the challenge of high unemployment due to the Covid pandemic. 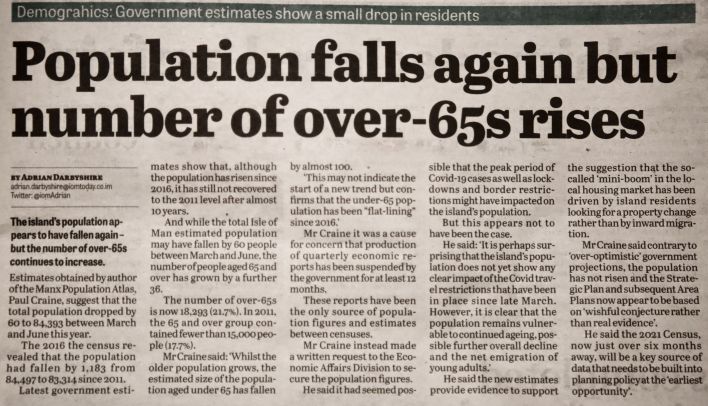