School rolls show no growth since the last census

In April 2016, a few weeks prior to the 2016 Census count, an analysis of school rolls data provided one of the first indications that the Isle of Man’s population was in decline.

A graph in the Isle of Man Population Atlas showed how school yeargroups had been shrinking as they passed up through the Island’s schools. The number of pupils in Years 1 to 7 in 2011 had fallen by 90 as they became Years 5 to 11 in 2015.

The September 2020 school rolls data have now been made available by the Department of Education, Sport and Culture. In the week when a Cabinet Office report on population ageing claimed that ‘…inward migration has been at around 377 people per annum’ since 2016, the school rolls data cast considerable doubt on these estimates.

Government population estimates are solely based on the number of people registered with the Island’s GPs, modified by a constant to overcome some lags in the data. The estimate at the end of June 2020 suggested that the Isle of Man might now have a population of 84,393 – an increase of 1,079 since the last Census.

The school rolls show a different picture. As Years 1 to 7 in 2016 passed up through the schools to become Years 5 to 11 in 2020, the number of pupils hardly changed. Over a four-year period, two of the yeargroups (Years 5 and 6) showed very small decreases, two yeargroups (Years 2 and 7) were unchanged and the remaining three yeargroups experienced very low growth. Overall, there was a net increase of only 12 students in 4 years. That’s an increase from 6,337 in 2016 to 6,349 in 2020, or just 0.19%. 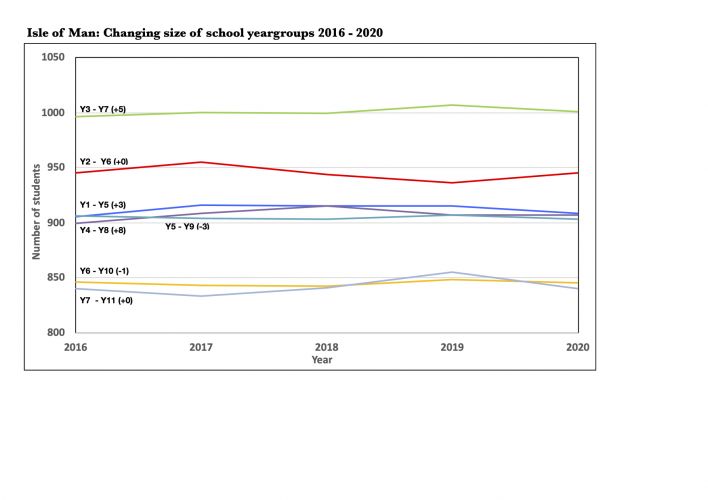 A more detailed look at the school rolls for these cohorts shows that they actually peaked in size in September 2019. Over the last year the number of pupils in these seven yeargroups declined by 26 (0.41%). This appears to match the reported decline of 65 in the number of people registered with GPs in the three months up to the end of June 2020.

I have argued for some time now that population estimates need to be based on a range of information sources. The reliance on GP registration numbers is too narrow. Clearly the September schools data suggests that the Island’s population may have experienced very little change since 2016. This only serves to confirm the continuing vulnerability of the Island’s population and the need for improved estimates.

The full census in 2021 will provide vital data to give a clearer picture of the Isle of Man’s demographic position.