Population climbs back to 2011 level - or does it?

The latest Government population estimate, provided by the Economic Affairs Division, shows that the population of the Isle of Man reached over 84,500 at the end of September 2020. This might be good news. It suggests that, after 9 and a half years, the Island’s population may have finally climbed back to its 2011 figure.

It is important to reflect on that last sentence. For the past five years, Island planning has been dominated by an unrealistic requirement to cater for a population of over 93,000 by 2026. The updated Strategic Plan and the Area Plan for the East both identified a need for the construction of 5,100 additional homes. But the official estimate is that our population has only just got back to where it was almost a decade ago. The bad news is that this even this modest estimate is not reliable.

The first graph below shows how the Island’s population has changed since the census in 2011 recorded 84,497 residents. In April 2016, the next census recorded 83,314 residents. These two figures are counts and can be relied upon. Between these censuses the population of the Isle of Man fell by 1,183, due, in large part, to the net emigration of younger adults. 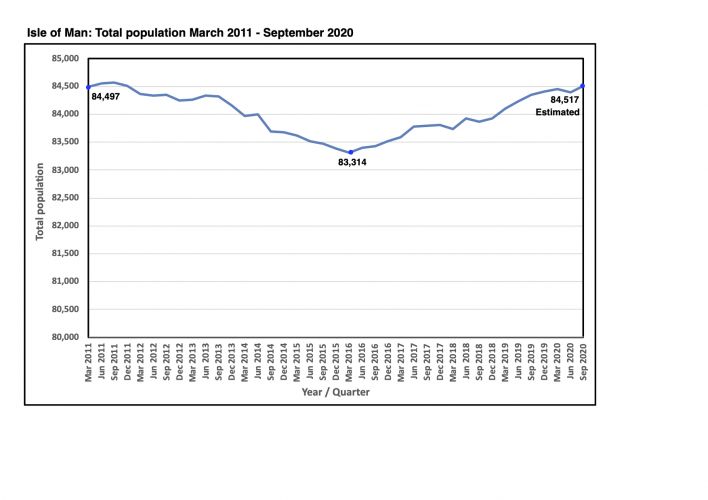 Whilst the census counts are correct, the line on the graph between 2011 and 2016 is not based on counts, but on estimates and is almost certainly inaccurate. There is evidence to suggest that the Island’s population did not peak until a year or two after the 2011 census. The real population total during this period is much more likely to have followed a different path over the five years between the start and end figures with a peak somewhere in 2013.

One of the key problems with using the number of people on the doctors’ registers is that when people leave the Island, especially if they are moving, or returning, abroad, they may not de-register. When Island residents relocate to the UK, their new GP is likely to contact their former GP to obtain health records and they can be removed from the register. When they relocate abroad, especially to countries where health care might not provided free, it is highly unlikely that any such contact is made.

The estimate suggesting that the population of the Isle of Man has climbed back to its 2011 level is far from certain. The September school rolls data suggest that the Island’s population may have experienced very little change since 2016.

The Government population estimates for the end of September offer further information on the breakdown of the population above and below the age of 65 years. The second graph looks very familiar: the direction of travel has been largely unchanged over the last five years. The estimated number of people aged over 65 years (shown by the blue line) has continued to grow year on year. It suggests that the number of people aged over 65 years now stands at 21.8% of the total population. The Isle of Man is still in the leading group of countries experiencing this global trend. 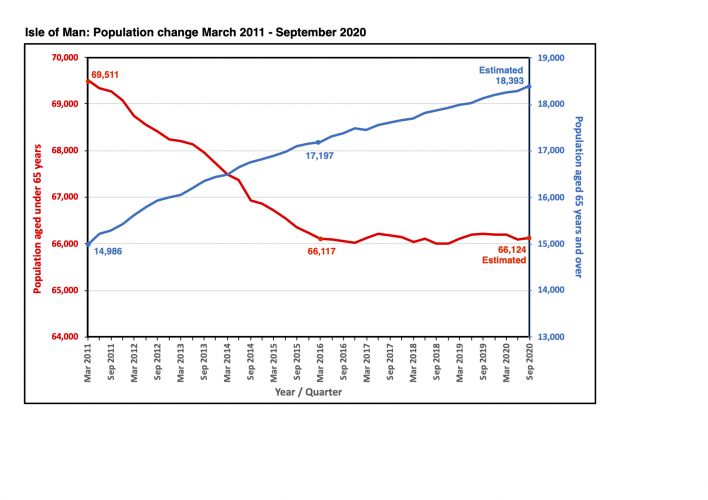 The 2021 Census is due to take place on 25 April next year and responses will be ‘digital by default’, with alternatives on request. Clarity on whether or not the population of the Isle of Man has reached a new high will be eagerly awaited.