Births have fallen for a tenth consecutive year

The fall in the number of births in the Isle of Man shows no signs of coming to an end.

The graph below shows that the decline in the number of babies being born (the red line) has now extended to a tenth consecutive year. In 2020, just 660 births were notified to the General Registry (down from 710 in 2019). Births are now at the lowest level in the Isle of Man for over 50 years.

Deaths in 2020, on the other hand (the green line), stood at 938, the highest figure this century. We know that, tragically, 25 of these (2.7%) were directly related to the coronavirus pandemic and perhaps even more were related indirectly. Deaths exceeded births last year by 278 giving the largest natural population decline in the Isle of Man since the 1980s. 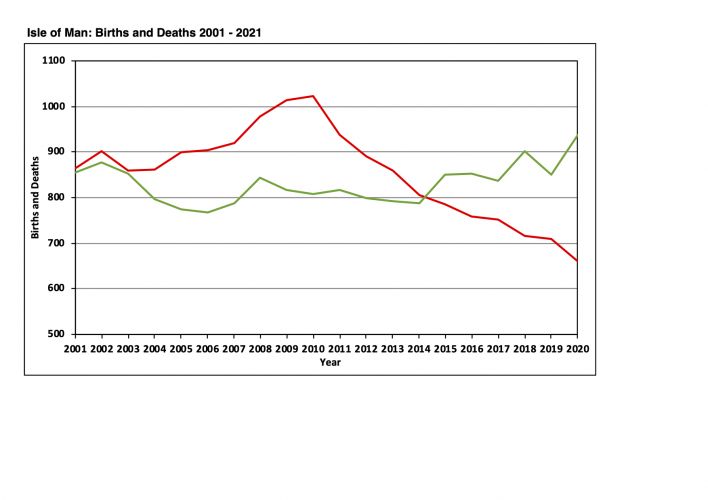 The impact of Covid-19 on births in the Isle of Man is unlikely to be showing in the 2020 data. Internationally, expectations of the effects of the pandemic on births have reversed since April. Changing headlines form the Economist show that in April 2020 the question was: “Will the coronavirus lockdown lead to a baby boom?” But by October 2020 it appeared that: “The pandemic may be leading to fewer babies in rich countries”.

Early speculation that the pandemic might result in increased births globally was never realistic. Concerns about the economy, recession, job security and health were always more likely to result in fewer births in 2021. Some demographers are beginning to use the term ‘baby bust’ (the opposite of a ‘baby boom’) to describe what they think may lie ahead.

In Jersey and Guernsey the births in 2019 were the lowest totals since 1982 and 2009 respectively.

Beyond the British Isles the experience of falling births is widespread. There is increasing evidence of a slowdown in the numbers of children being born. It seems that many parts of the world are experiencing a great demographic reversal as they transition into population decline.

At the international level, this transformation is understood to be the result of a decline in the average number of children a woman gives birth to, known as the fertility rate. The world population is still growing, for now, but the number of children per woman is declining fastest in the Least Developed Countries and is expected to converge for all levels of development at under 2 by the end of this century.

If the fertility rate drops below 2.1 then the size of populations will start to fall (assuming balanced migration). Singapore already has a fertility rate of under 1 and the populations of more than 20 countries, including Japan, Spain and Thailand, are projected to halve by 2100.

The fall in fertility is being driven by more women in education and work, as well as greater access to contraception, leading to women choosing to have fewer children. In many ways, these falling fertility rates are a success story.

In the Isle of Man, the fertility rate was 1.69 in 2016 and is falling. There is evidence that fewer women are having subsequent children (after a previous child). But why have births been falling faster in the Isle of Man over the past decade than in the UK and most other parts of the world?

One major cause of this is the net emigration of young adults. Between the censuses of 2011 and 2016, emigration from the Isle of Man was greater than immigration in every age group. The largest migration losses were in the 20-29 age group in which there were two people leaving the Island for every one person moving in.

As a result of this outward movement, the number of women of child-bearing age (usually taken as 15-44 years) living in the Isle of Man fell by 8.6% between 2011 and 2016. Fewer young women having fewer children is a major factor In the Island’s declining births.

Five years ago, in the Isle of Man Population Atlas, I outlined the vulnerability of the Island’s population. Our population history, within the lifetime of many residents, has involved periods of rapid depopulation and periods of galloping growth, both of which highlighted our vulnerability to considerable economic and social instability. Like many small island economies we are vulnerable to the net emigration of young adults and to population ageing.

How far do the number of births on the Isle of Man have to drop before we have the will to take strategic action? The Population Atlas argued that population vulnerability can be reduced. I would suggest that four key actions are needed to address the loss of a third or our births in just one decade: i) improving population monitoring, ii) establishing realistic priorities and policy, iii) taking action to improve fertility rates by supporting families and iv) encouraging the Island’s young people to remain or return.

According to the UN, two-thirds of countries in Europe have introduced measures to increase fertility rates, from baby bonuses and tax incentives to paid parental leave.

The Census in April will provide updated information and the House of Keys Election in September will bring a fresh opportunity to address our population issues. This opportunity must be grasped.