Population estimates before the 2021 Census results

The Isle of Man’s 2021 Census took place at the end of May and work is underway to collate responses from more than 35,000 households. Approximately 75% of the forms were completed online, so the processing time should be shorter than for the previous census in 2016.

There are three key demographic questions that we need the census report to answer:

• Has the resident population of the Isle of Man continued to decline since 2016?

• How much further has the ageing of the Island’s population progressed since 2016?

We also need some clarity on the impact of a key government strategy:

• Has the economically active population grown?

These are hugely important questions. The population and the economy of the Isle of Man are interlinked. If the outward migration of young adults has persisted, then this has become a longer-term trend that needs to be addressed by urgent action. If the ageing of the population has progressed further we must identify sustained steps to reduce a damaging population imbalance. These issues come together in the question of the size of the economically active population, although delayed retirement rates and fewer school-aged children may prove decisive on this.

While we wait for the census results, the Government population estimates for the end of March make interesting reading. Are they an indication of the population we can expect to see when the census count is complete? Or will we again see a mathematical adjustment to the estimates as happened in 2016?

The Government estimates, based entirely on the number of people registered with GPs, suggest that the population began to increase immediately following the 2016 Census and in March this year reached a record high of 84,755. This would represent an increase in population of 1,441 (1.73%) since 2016. 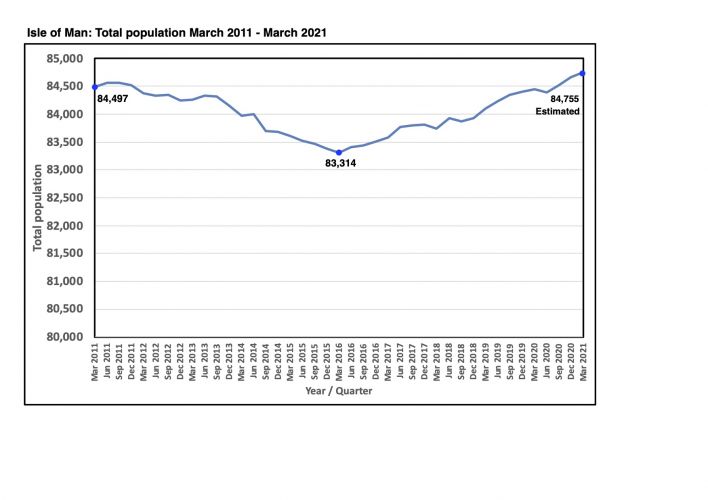 The second graph below reminds us of the rapid decline in the population aged under 65 years between 2011 and 2016. A fall of nearly 3,400 in five years. The blue and red lines on the graph after 2016 are Government estimates. The number of people aged over 65 years (shown in blue) is now believed to have reached over 18,500. This is over 21.8% of the total population and keeps the Isle of Man in the group of countries with the oldest populations along with Japan, Italy, Portugal, Finland, Germany and Greece.

Until the Census Report is published we simply don’t know how reliable the estimates are. 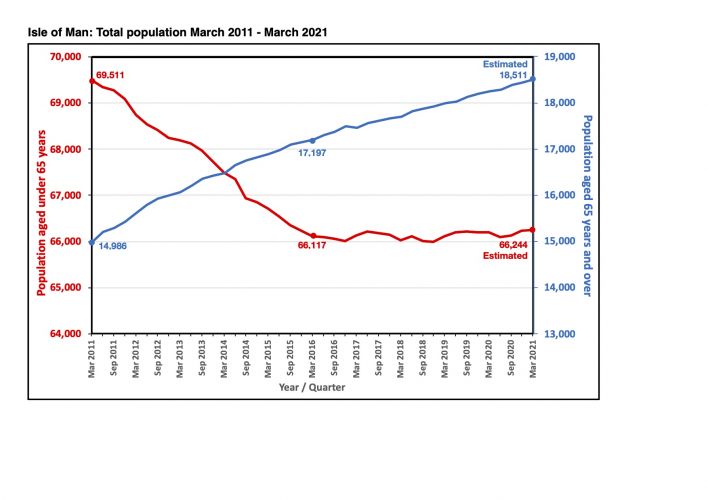 Caution over estimates from a single source

I have written in previous blogs about the need to be cautious about population estimates based on a single source, such as the GP registers (see blog in December 2020). If former residents who left the Island did not notify their GP, they may remain on a register for some years. The evidence for this is that in 2011 the census population was 2.9% lower than the number of people registered with GPs. Five years later, in 2016, the census population was 4.2% lower that the GP registers (see blog in June 2020). The larger gap is a measure of increased numbers who had left the Island but still appeared on GP lists – sometimes referred to as ‘ghosts’. The GP register is quick to capture new arrivals but slower to remove those who have left the Island.

Evidence from school rolls provides a picture that differs from the Government estimates (see blog in October 2020). As school Years 1 – 7 in 2016 passed up through the schools to become Years 5 to 11 in 2020, the number of students hardly changed. Over 4 years there was a net increase of just 12 students, or 0.19%. This ‘actual’ data does not support the ‘estimate’ of population growth.

The Isle of Man in Numbers

I have argued for some time now that the monitoring of the Island’s population needs to be based on a wider range of information sources. The 2021 edition of ‘Isle of Man in Numbers’, a government document presenting economic and social data, released earlier this month, could provide a useful starting point for the identification of additional indicators of population change. It would be interesting to explore what a panel with detailed knowledge across a range of sectors would conclude from the data available.

For example, might the 16% rise in house prices (Fig 16) and the 17% rise in the number of property (house) transactions since 2016 (Fig 17) provide evidence of inward migration during the pandemic? On this issue, estate agent reports suggest that that the surge in property sales since the last quarter of 2020 more likely reflects on-Island demand.

What other potential population indicators are available?

• The number of people employed (which was adjusted downwards following the 2016 Census) has generally flatlined since 2016 (Fig 4).

• The construction of private dwellings between 2016 and 2020 declined marginally (Fig 68).

Might a panel conclude that there is no evidence here to support an estimate of population growth?

Impact of the pandemic on migration

If the current Government estimate are unreliable, the uncertainty over what the Census will show has been exacerbated by both Brexit and the impact of the Covid pandemic over the past 18 months.

In the first half of 2020 there was a trebling of unemployment. In more normal times this would have led to outward migration. Research published earlier this year suggested that in the UK, the burden of job losses during the pandemic has fallen disproportionally on non-UK workers resulting in return migration and “an unprecedented exodus” of foreign-born residents1. Has something similar happened here?

The Census will not offer any new data on natural change which reflect births and deaths. In an earlier blog (April 2021) I reported on ten consecutive years of decline in the number of births taking place in the Isle of Man. Births fell by an extraordinary 35.5% between 2010 (1,023) and 2020 (660) and are now at their lowest for 50 years. There have been a number of reasons for the decline in births but in the Isle of Man the decline in the 20-29 years population age group has been a key factor.

Data for the first half of 2021 suggests that the registration of births remains low (predictions of a baby-boom in the pandemic were never realistic). There were 338 births registered in the six months from January to June compared with 345 in the same period in 2020. There is no evidence yet of an upturn.

Deaths in 2020 stood at 938, the highest figure this century, reflecting the tragic early impact of the Covid virus. Deaths have exceeded births in the Isle of Man every year since 2014, and this position seems set to continue. In the first half of 2021, 413 deaths were recorded making an excess of deaths over births of 75. It is noticeable, however, that the 413 deaths between January and June 2021 were much lower than the 499 deaths in the same period one year ago. A welcome development.

When the 2021 Census Report is published, and we have answers to the questions above, it is vital that the information is analysed and used to inform planning and improve the policies of the next administration. It is also necessary to look in greater depth at how population monitoring can be taken forward before the next census.