The following blog exploring a possible population policy for the Isle of Man will be presented in 2 parts. Part 1 will introduce the Island’s population imbalances, as highlighted by the 2021 Census.

The Isle of Man has reached zero population growth - and many people might welcome that. The population recorded by the 2021 census was still over 400 lower than it was in 2011. According to the latest Social Attitudes Survey in 2019: “The greatest proportion of respondents, and very nearly the majority (48%), feel that the Island’s population should remain at its current level”. This view had remained constant over the previous 2 years: the comparable figures in 2017 and 2018 were 49% and 48% respectively. In 2016, however, before the publication of the 2016 Census, the picture was slightly different with 57% of the respondents suggesting that the population should remain at its current level. These successive surveys, have also shown a growth in the support for population increase from 27% in 2016 to 39% in 2019.

The graph below shows the resident population of the Isle of Man since 2001. The first 10 years of the century were characterised by population growth with the total number of residents rising from 76,315 to 84,497 between 2001 and 2011. The population increased by an average of 750 per year up to 2006 and almost 890 per year in the following five years. The 2016 Census showed a reversal into population decline as the number of residents dropped to 83,314; a modest fall of almost 240 per year. The latest head count in the 2021 Census shows growth of just 150 per year to give the Island a population of 84,069 in 2021. 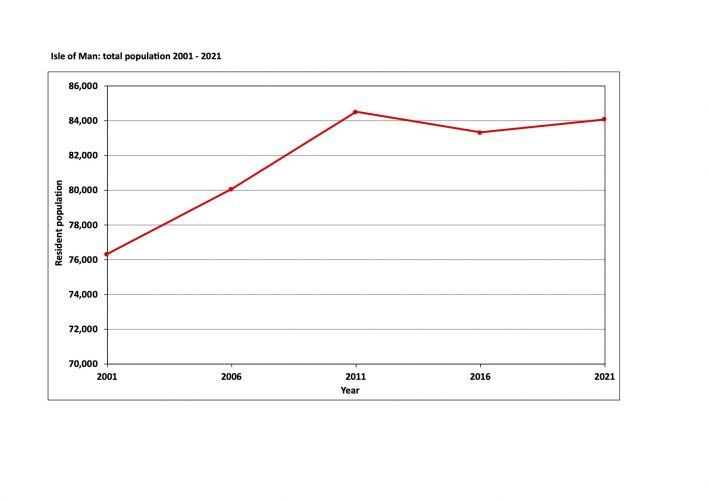 Attitudes relating to the size of the Island’s population are affected by a range of factors from political and economic, to environmental and social. Arguments in favour of zero, or slow, population growth have been well rehearsed over many years and have stood the test of time. They cover the impact of population growth on house prices, the dilution of Manx culture, the spread of settlements into the Manx countryside and pressure on infrastructure as well as growing inequality.

Arguments in favour of population growth have also been voiced repeatedly and often with numerous possible targets being offered, some well in excess of 100,000. These have tended to focus on growing and diversifying the economy, attracting inward investment, meeting employment demand, funding growing pension costs, increasing the skills base and expanding the range of services on offer.

The difficulty with zero population growth is that this does not equate to the population staying the same. The Island’s population total may have flatlined over the past 10 years but between 2011 and 2021 it has seen some significant changes that have resulted in very considerable imbalances.

The first of the profiles below shows the population structure of the Isle of Man in 2011. This might be considered as broadly ‘balanced’. The large cohort aged 60-64 years is the post-war “baby-boom” group, which reflected a higher level of births in the years immediately after the Second World War. Leaving that group aside, this developed profile has relatively straight sides, though with the largest groups between 40 and 54 years reflecting inward migration of younger working adults in the late 1980s and 1990s. The distribution across the four broad age groups shown in yellow (over 65 years), light orange (40-64), dark orange (15-39) and red (under 15) approximately equal 15,000, 30,500, 25,000 and 14,000 respectively. 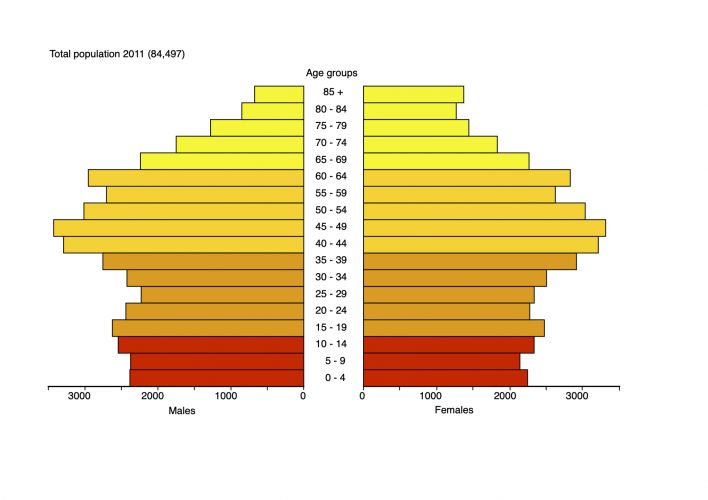 In the second profile for 2021, the size of the Island’s population was just over 400 lower than in 2011 - but this profile shows a very different population structure. The distribution across the four broad age groups now equals 18,500, 30,000, 23,000 and 12,500 respectively. The population has noticeably aged as has the distribution of the working population within the 15-64 groups. 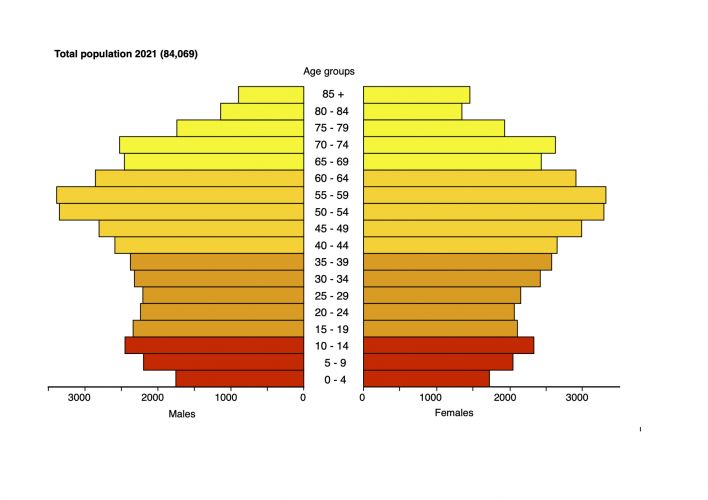 The population size of the Isle of Man has largely “stayed the same” over the past 10 years - but the 2021 population has a very different composition with some strong imbalances.

We can look at this population ageing from the perspective of the Island’s working population and question how the economy will be able to afford future pensions. But perhaps the biggest difficulty faced by a community that has a high percentage of older people is that there is a shortage of working people to provide the level and range of social and health care services that are require. Age imbalance is not beneficial to any age group.

The 2021 census shows that in the 20-29 years age group emigration is much stronger than immigration - and the migration imbalance means that the Island is losing its young adults. This is not the result of students going to university as they are all counted as still resident on the Island. The significance of emigration in this age group is enormous. Between 2011 and 2021 the number of women of child-bearing age (usually taken as 15-44 years) fell by 11.2%. This is one of the prime reasons for the falling number of births. There are other factors too - the tendency for women to have their first child at an older age, bigger gaps between children and fewer children. These are wider trends developing far beyond the Isle of Man as global birth rates begin to fall.

The graph below shows how births in the Isle of Man peaked in 2009 and 2010 when over 1,000 births were recorded each year. After 2010 there were 10 extraordinary, consecutive years of decline reducing the number of births to 660 in 2020 (a remarkable 35% reduction in 10 years). Births had exceeded deaths in every year since 2001 giving natural population growth but by 2015 births had fallen below deaths and in 2020 and 2021 the gap between births and deaths had widened to over 200. We are experiencing natural population decline resulting in fewer children.

The base of the 2021 profile above shows just 1,700 girls aged under 5 years. Groups this size will further reduce the number of women of childbearing age in twenty years time.

The low level of births will not just remain visible in the Island’s profile for many decades, it has the potential to become cumulative: fewer births today will contribute to fewer births in the following generation.

Given these imbalances, and the direction of travel, the need for intervention to ensure that the population the Isle of Man is sustainable is clear. The Island's population total may have 'stayed the same' but the population has some extreme and growing imbalances that need to be addressed. This is the first of two blogs on whether the Isle of Man population should remain the same or be encouraged to grow. Part 2 will look at some of the issues of population rebalancing and growth.