57% believe that the population should stay the same

One of the questions for oral answer in the House of Keys yesterday (8 November) asked what plans the Department of Economic Development might have to relax work permit legislation in order to overcome skills shortages. As part of his response, the Minister indicated that: ‘The Department is… looking at ways of making the Island more attractive to potential workers’.

On the same day, the Isle of Man Examiner carried a front page article contrasting changes in house prices in the UK and the Isle of Man (Property prices up 8% in UK but moving little here). The article quoted ‘a Manx government spokesman’ as saying: ‘Rather than looking at specific measures to boost the housing market, government’s policy has been to grow the economy and the working population, which as it takes effect could be expected to increase demand for housing’.

The Isle of Man, it seems, has a policy of growing the working population - attracting people of working age – but is that the same thing as having a ‘population policy’? At a time when most countries in Europe are struggling with an influx of refugees and when immigration has played such a significant role in both the UK’s ‘Brexit’ referendum and the presidential election in the USA, are we clear about what we are trying to do to our population?

Are we simply interested in numbers or do we have a more focused aim of balancing the Island’s ageing population profile? Do we have a policy on whether we are looking to attract any workers or only people who command a good income and will contribute to our tax base? Are we looking to reduce specific job shortages or to encourage general immigration? Are we just looking to prevent population decline or are we committed to growth? Are we equally committed to reducing emigration as well as attracting immigration? Are we going to look first at encouraging our own young people to return? Do we want an open-ended policy or a fixed-term policy? Do we have a population target in mind? What rate of population growth do we think is sustainable? Do we have the right monitoring in place as well as appropriate checks and balances?

Having passed through a general election just over 6 weeks ago, we might ask whether a clear mandate now exists for a policy of population growth. In reality the debate on population policy is only just beginning.

In June this year, the government published the 'Isle of Man Social Attitudes Survey 2016'. Undertaken by an independent company, the survey was available online or on paper at accessible locations in different parts of the Island. It brought well over 2,000 submissions which were filtered down to 500 responses representative of geographical areas and ages.

The report included four graphs based on questions about population and immigration. 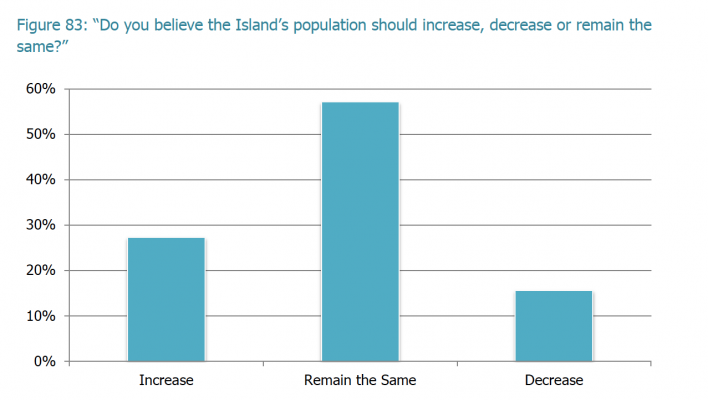 Figures 84 and 85 attempt to drill down into which sectors of the Island community want to see the population grow, decline or stay the same.

Figure 84 explores whether 'income deprivation' affects views on population growth. Data on income support, jobseeker's allowance and employed persons allowance have been used to produce a type of socio-economic index. This has been calculated for each of the Island's 4-figure post-codes. The areas that are most deprived of income are included in quartile 1. The areas with the lowest level of income deprivation are in quartile 4. The only statistically significant feature of the results on Figure 84 is that 61% of the people in quartile 2 (the second most deprived areas) want the population to stay the same compared with of 50% of the population in the wealthier quartile 4. At least half the population in every quartile, right across the socio-economic spectrum, would prefer the population to remain at the present level. 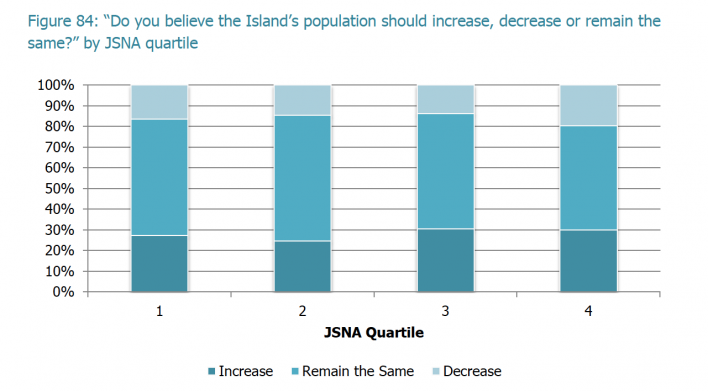 The map below is an attempt to shed some light on these quartiles, which originated in the Joint Strategic Needs Assessment (JSNA) document of 2014. It shows that quartile 2 mainly covers the Island's towns, along with Jurby and Bride. Quartile 4 is made up exclusively of parish districts. But there is no clarity of views here. The quartile 4 column on Figure 84 shows fewer people supporting the status quo but it also shows more people in favour of growth as well as more people in favour of decline than in quartile 2. 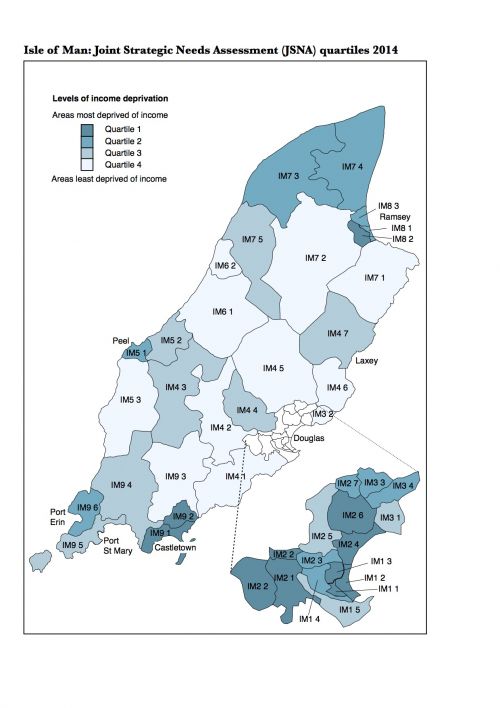 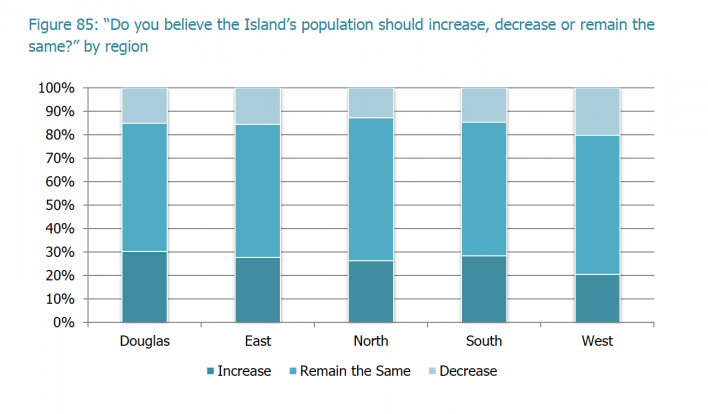 The final graph (Figure 86) indicates that 39% of the Island's population believe that immigration improves the quality of life here, whereas another 34% believe the opposite. 28% of the population do not know whether immigration is good or bad for the Isle of Man. 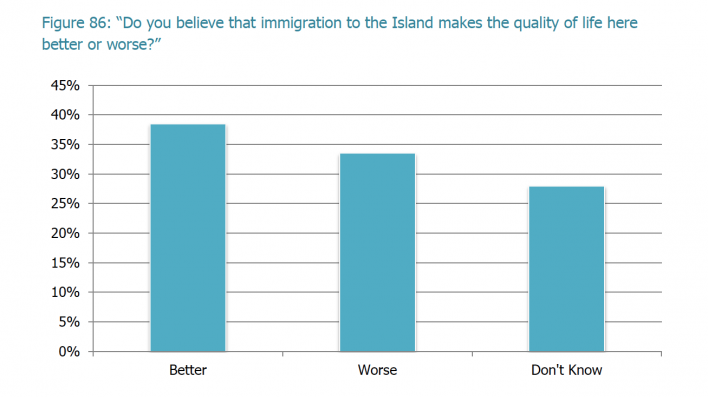 The attitudes survey suggests that there is a starting point of very limited public support for population growth in the Isle of Man. But that cannot be the end of the matter. Our population is ageing. It is ageing not just because we are living longer (every 6 and a half years that pass see our average age of death rising by another one year) - it is ageing mainly because we currently have a large proportion of our population in the 45-70 years age groups who will be aged 55 - 80 years by 2026 and aged 65 - 90 years by 2036. At the same time we have seen a remarkable 23% fall in the number of births from 1,023 in 2010 to 785 in 2015. We have now returned to a position of more births than deaths each year, something that had not happened since the year 2000. There is evidence that young families are leaving and that our own young people are less likely to return after university. Since reaching a peak in 2013 our population has shown slight decline.

A policy of population growth could encourage economic expansion, help to balance the ageing population, enable recruitment in areas of skills shortages, restore the balance between births and deaths and make our community more youthful and vibrant. But it also has the potential to overheat the economy, put pressure on our infrastructure, add to the demand for public services, swallow up green fields and increase traffic flows. We need to be clear about what we are trying to achieve and the methods we might use. We need an open debate about our population that engages the general public and raises awareness of the issues. And we need to ensure that any policy of population growth is sustainable and acceptable over a fixed-term period.

Perhaps we also need to ensure that the limited population control we have is kept in place, albeit in a more flexible form.