It is very apparent just how much difference there was between the Island's twenty-four local authorities in terms of the age and sex of their populations.

In 1961 the Isle of Man appeared to be misnamed. After a decade of emigration of young adults, especially males, looking for work there were just 84 men for every 100 women. To put it another way the Island's sex ratio was 0.84. To indicate how extremely low a figure that is, in current world rankings a country with a sex ratio of 0.84 would rank equal lowest in the world out of 234 countries, along with Estonia. In 1961, the Isle of Man hosted one of the most female populations on the planet.

It took fifty years for a more normal balance between the sexes to be restored. In 2011, the Isle of Man sex ratio, at almost 0.99 males per female was in line with Ireland (1.00) and the UK (0.99). Across the Island, the sex ratio varied from 0.91 males per female in Rushen to 1.23 in Jurby. The explanation for such a high figure in Jurby is the location of the prison there. In 2011 the prison held 111 residents (13.9% of the parish population), mostly male. 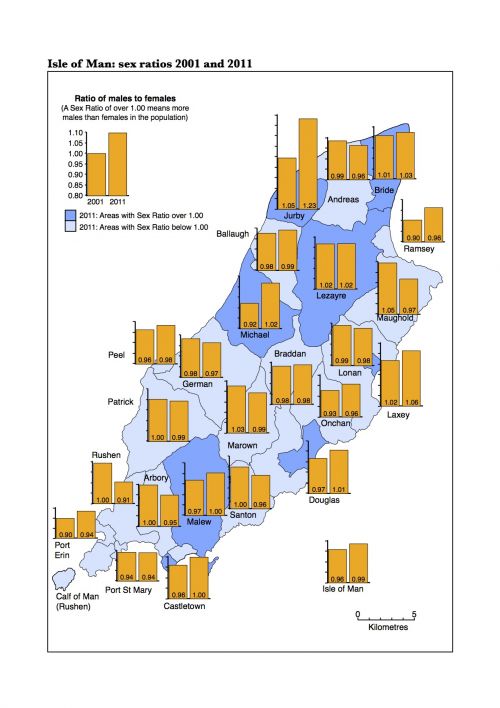 At birth, sex ratios are remarkably consistent at around 105 - 107 males births for every female birth. In other words about 52% of babies are boys. But the death rate is then higher for males than for females in every age group. In 2011, the 0-19 year olds in the Isle of Man were mostly male (shaded blue below) and the sex ratio was 1.08 males per female. The over 60 years age group was mostly female (shaded orange) with a sex ratio of just 0.88 males per female.

Broad age structures varied considerably across the 24 census districts in 2011. In the parish of Bride 66.6% of the population was aged over 40 years whilst in Jurby the comparable figure was just 46%. The large Douglas population with 47.3% aged over 40 years helped to pull down the Island average to 53.8%. 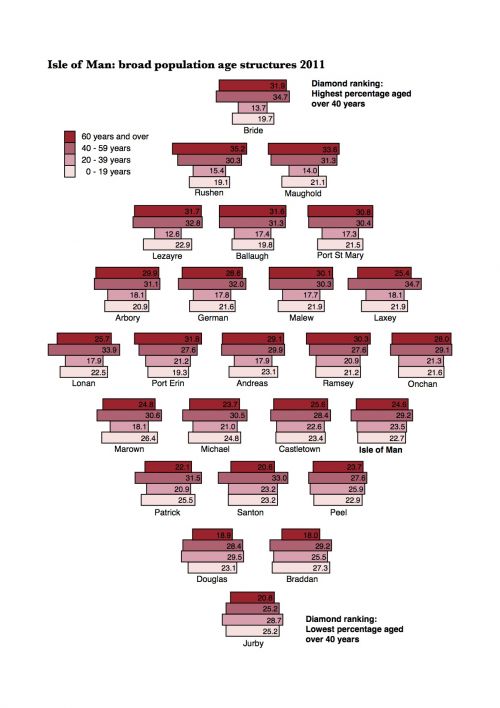 In 2011, median ages (the ages that divide populations in two with half older and half younger) varied between 38 years in Douglas and 51 years in both Rushen and Bride. The isopleth map below shows the median age as a surface rising with distance from Douglas and peaking in the extremes of north and south. This pattern is only interrupted by Jurby, which has the highest percentage of the population living in public sector housing and the second highest percentage of 0-15 year olds in the population. 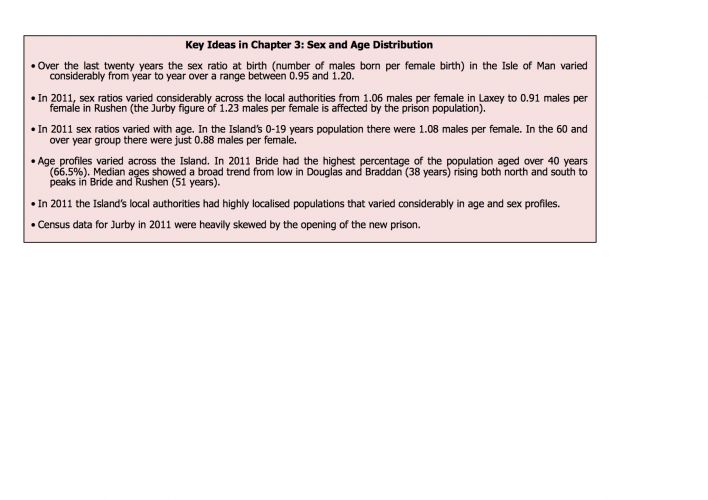