The September 2016 pupil numbers in schools have not confirmed that the slow decline in the Island's population has stopped.

In the final pages of the Isle of Man Population Atlas there was a suggestion that the quarterly economic reports to the Council of Ministers should routinely include a population estimate. The Atlas proposed that this could be based on, '...indicators such as the number of people registered with a general practitioner or school year group numbers'. It was pleasing to see that two months after publication, a population estimate based on registration with GPs was included for the first time in the CoMin first quarter economic report. It was even more pleasing to see that the second quarter report provided the first evidence of an end to population decline. However, the latest data on school numbers do not confirm this.

A recent newspaper article (Isle of Man Examiner, 18 October, 2016: ‘Compare well: pupil to teacher numbers’) reported that student numbers in secondary schools had declined by sixty-nine over the past year. This is not simply due to a larger 'leavers' year group in July (Year 11) than the new intake group in September and invites further analysis.

The graph below uses data supplied by the Department of Education and Children to show how individual year groups across the Island’s schools changed in size between September 2015 and September 2016. This is primarily an indicator of the balance between families arriving and families leaving the Island (other possible causes are discussed below). Where the number of pupils falls, there has been more outward movement than inward movement. 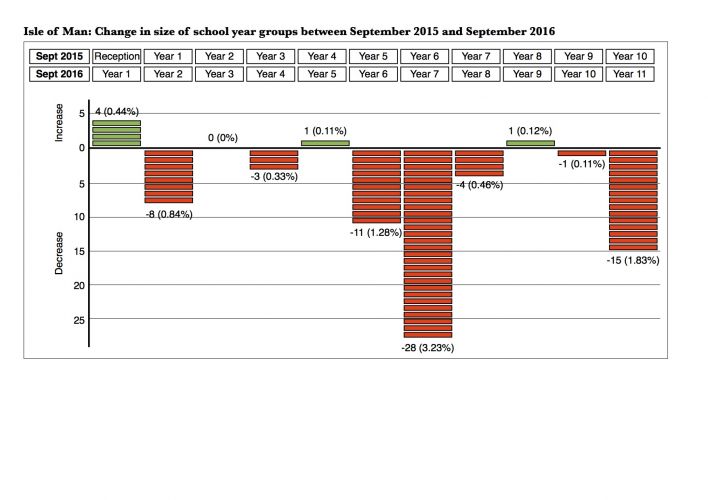 It is clear from the graph that the balance of movement, although not large, is outward. Over the last school year more families left the Isle of Man than arrived. Taking all year groups from the Reception Year of 2015 becoming Year 1 in 2016 through to Year 10 becoming the new Year 11 the balance showed a net loss of 64 pupils. This amounts to 0.65% of the total number across these eleven year groups.

It is possible that the largest fall shown, when the last primary year group (Year 6) of 2015 move up to secondary school (Year 7) in 2016 with a loss of 28 pupils, is attributable to some pupils leaving the government education system at age 11 years to attend a public school on or off-Island. This might be offset by some pupils who have been home educated up to age 11 year being enrolled at secondary school. Even without the decline at the start of secondary school, the overall pattern would still show a fall in pupil numbers. It is important to note that this is in very marked contrast to the period between 2001 and 2011. As the 0-4 year olds of 2001 became the 10-14 year olds of 2011, they increased by an average of over 13 pupils per year group, per year throughout this ten-year period - a very clear indicator of strong population growth.

This reduction of 64 pupils across the school year groups between September 2015 and September 2016 suggests that there is continued population decline, at least in certain age groups. This does not appear to be consistent with the second quarter economic report to the Council of Ministers, based on the number of people registered with doctors, which estimated that the population had increased by 72 over the period from June (Q2) 2015 to June (Q2) 2016. The value of using more than one indicator for estimating population change is apparent. 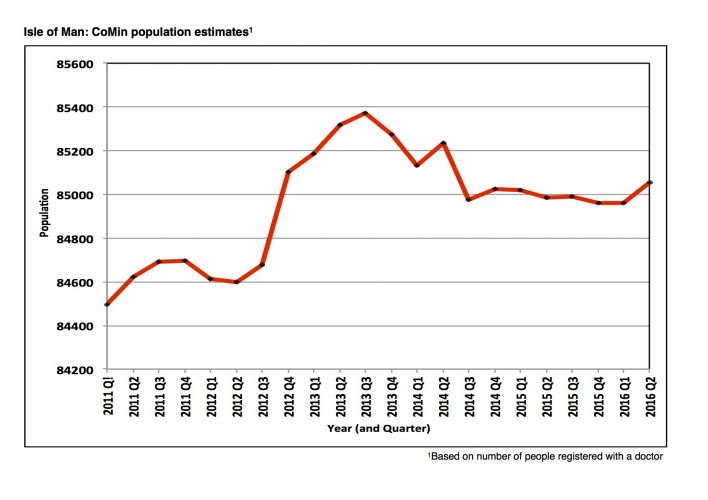