The largest of the compulsory school year groups across the Island’s primary and secondary schools in September 2021 was Year 8 with 1,003 students. This group represents students born in 2009 and 2010. The smallest year group was Year 1 with 785. These students were born in 2016 and 2017. Based on the declining births, we can expect the number of pupils entering our primary schools to decline for at least another five years.

The school rolls data also show that as Years 1 to 6 in 2016 (just a few months after the 2016 Census) passed up through the schools to become Years 6 to 11 in September 2021, the number of pupils in this group hardly changed. Over the five-year period, three year groups experienced small increases (current Years 6, 8 and 9) and three year groups showed small decreases (current Years 7, 10 and 11). The first graph shows how little change there has been since 2016. These figures are actual counts - not estimates. 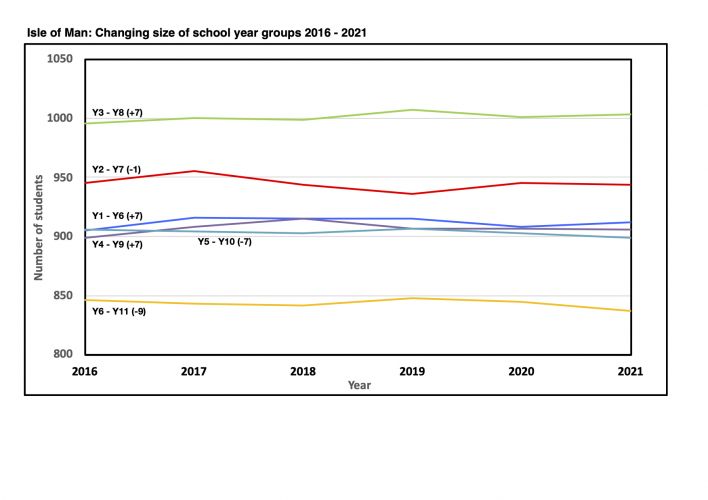 Overall there was a net increase of just 4 students over a 5-year period in a group containing almost 5,500 students. That represents growth of 0.07%.

A closer look at the data shows that this student group actually peaked in 2017 and has declined by 25 since that date.

As year groups pass up through the schools, numbers can only be gained or lost through migrations to and from the Isle of Man, or by the relatively small number of pupils entering or leaving the DESC schools for education that is private or ‘otherwise’ (home education).

The school rolls data provide no evidence of net migration gain or net migration loss in families in the Isle of Man between the two censuses.

The Government population estimates for the end of September 2021 (3rd quarter) were provided by the Economic Affairs Division in late October. The second graph shows the actual resident populations at the time of the 2011 Census (84,497) and the 2016 Census (83,314). During the period between those years the resident population of the Isle of Man fell by over 1,180 (or 1.4%). Those figures are taken from the census counts.

The graph also shows the Government estimate of the Island’s population between the 2016 Census and the end of September 2021, based entirely on the number of people registered with GPs. This suggests that the Island's resident population may have peaked in June this year at 84,829 before falling back to 84,746.

As we wait for the 2021 Census report, the best we can say is that the estimates are “uncertain”. 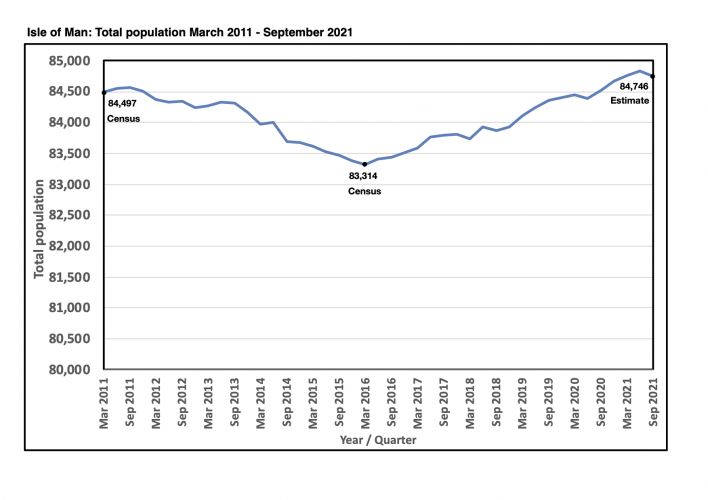 The blue and red lines on the graph after 2016 are Government estimates. The number of people aged over 65 years (shown in blue) is now believed to have reached over 18,600. 22.0% of the estimated total population is believed to be aged over 65, which would keep the Isle of Man in the group of countries with the oldest populations along with Japan, Italy, Portugal, Finland, Germany and Greece.

The estimated number of people aged under 65 years (in red) has been – for want of a better expression – “flatlining” since 2016. There actually appears to be 16 fewer people aged under 65 than there were five years ago. Ten years on from the 2011 Census the estimates suggest that the under 65 population remains over 3,400 smaller than it was. 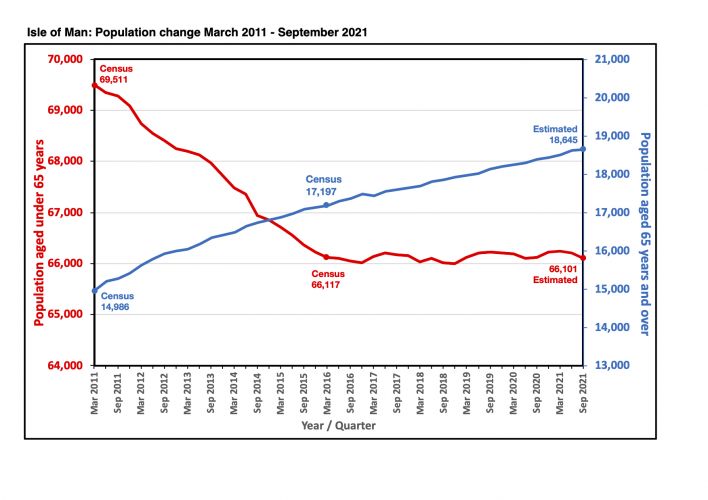 Possibility of some net migration gain?

If the total population aged under 65 years is, indeed, flatlining, as suggested by the estimates, the gap must have been eliminated by a slow level of net migration gain of the order of 300 people per year in the under 65 years population.

Returning to the start of this blog – the possibility of net migration gain in the under 65 population is not supported by the school rolls data.