The Isle of Man Population Atlas captures and presents the population of the Isle of Man through more than 130 imaginative maps and graphs and offers an authoritative commentary on a wide range of population issues. 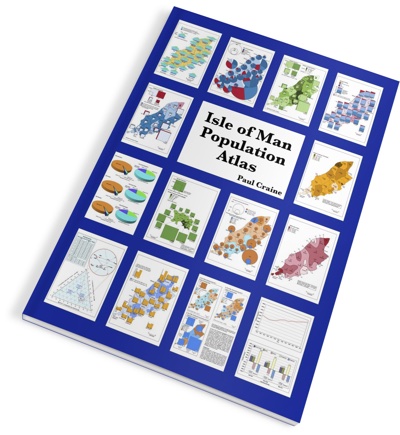 This website complements the information in the Atlas. Many of the maps and graphs from the Atlas have been made available here for use in accordance with copyright. This site will be used to publish new and updated information from the 2016 Census as the results become available. If you have an interest in the Isle of Man or population issues, the Atlas itself contains much more information and commentary for you to enjoy and digest.

The Isle of Man Population Atlas had two successful print runs but is now out of print.

Population - stay the same or grow? Part 2: towards a population policy
Published Tuesday 20 September 2022 in the Blog

This blog follows on from Part 1 which introduced the Island’s population imbalances as highlighted by the 2021 Census. Given these imbalances, and the direction of travel, the need for intervention to ensure that the population the Isle of Man is sustainable is apparent. Part 2 will look at some o…

The following blog exploring a possible population policy for the Isle of Man will be presented in 2 parts. Part 1 will introduce the Island’s population imbalances, as highlighted by the 2021 Census. Zero Population Growth The Isle of Man has reached zero population growth - and many people might…

2021 Census The Isle of Man’s 2021 Census took place at the end of May and work is underway to collate responses from more than 35,000 households. Approximately 75% of the forms were completed online, so the processing time should be shorter than for the previous census in 2016. There are three key…

The fall in the number of births in the Isle of Man shows no signs of coming to an end. The graph below shows that the decline in the number of babies being born (the red line) has now extended to a tenth consecutive year. In 2020, just 660 births were notified to the General Registry (down from 71…

The latest Government population estimate, provided by the Economic Affairs Division, shows that the population of the Isle of Man reached over 84,500 at the end of September 2020. This might be good news. It suggests that, after 9 and a half years, the Island’s population may have finally climbed…